The basic elements of Modernism, as had already been expressed by the 19th century, promoted the recognition of individual liberties and the organization of society within the framework of a representative democracy. Faith in the possibility of the continuous progress of society was shattered throughout the world by the horrors of two world wars and the ascendance of totalitarianism in the first half of the 20th century. For Greece, that period proved even more trying: the catastrophe in Asia Minor, the National Schism, the Metaxas dictatorship and finally, the Occupation and the Civil War, were all traumatic experiences which made those times even more painful for the country. As of the early ‘50’s, Greek society, despite the still raw divisive wounds of the past, managed to heal those wounds to a considerable degree, mainly through economic development and the accompanying rise in the standard of living. At the same time, the prioritization of the need to consolidate democratic freedoms and the removal of the dividing lines between ‘winners’ and ‘losers’, became major features of political discourse and of the activist movements of the ‘60’s. This decade, however, was destined to be marked by the violent interruption of the political and social evolution of the nation by the dictatorship of the 21st of April.

Overnight, the leaders of the military coup succeeded in imposing a tyrannical regime of fear and anomie, characterized by the dissolution of democracy and blatant violation of human rights and individual freedoms: imprisonment, torture, exile, persecution and murder of citizens. The active pockets of resistance within the country and international support for the struggle abroad against the dictatorship, underscored the responsibility of citizens to defend their constitution against any threat. Despite these efforts, the regime continued to survive, at the same time decisively impacting the structure of Greek society, shaping attitudes which, to a great degree, would characterize it for years to follow. Moreover, the violation of the democratic freedoms of the Greeks created a painful and extremely dangerous rupture with Europe: a ’freeze’ regarding the agreement for the accession of Greece to the European Common Market, and its expulsion from the Council of Europe. The tyrannical regime, in effect, managed to stall the long-term efforts of the country to become a full member of the developed world. The tragedy of Cyprus, for which the regime of the colonels bore the primary responsibility, led to the collapse of the dictatorship, confirming the poet’s warning that ‘...tragedy awaits, inevitably, in the end’. 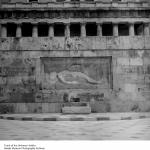 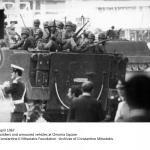 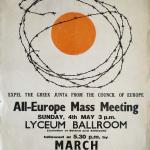 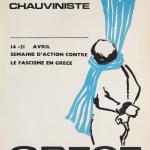